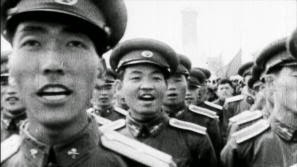 Statement Analysis is applied to documentaries and I have written about some of the more recent World War II documentaries where soldiers interviewed were likely difficult to locate, and given the nature of prosecuting mechanized war, sometimes 7 out of every 10 soldiers were solely used for support, and not for direct combat.

What are the odds of finding living veterans of World War II who could speak of the war for a televised documentary?

The 70th anniversary of D Day was just marked.  This means that the very youngest D Day vet would be no younger than 87 years old, with the average being 93 years old.

Now that the documentary film makers have actually found a living vet, they now must ask him about "combat" even though 70 percent or more did not see actual combat, depending upon the battle.  What will they do if the vet was in supply?  Kitchen?  Secretary?  Clerk?

Given the difficulty of the past 10 years in speaking to actual WWII vets, do the documentary film makers go ahead and interview him and splice the film, and show it anyway?

Statement Analysis sometimes can 'spoil' things for television watchers, but if you watch enough of these documentaries and follow the pronouns, you will eventually come upon some veterans who are being interviewed who are not giving reliable testimony.

I recently saw the former "Military Channel" (now called "American Hero Channel" which shows lots of Mafia stories) documentary "Chosin", about the marine battle of the Chosin Reservoir in Korea in which the Americans battled the Chinese, though "Washington" denied that any Chinese military were there.

The show was well publicized this Spring and I recorded it in anticipation of hearing some moving stories.

I heard some of them connect themselves to the combat experience with the pronoun "I" and past tense verbs.

They told some painful and touching stories of what they experienced.  Those who especially used "me" and "I" used sensory description and the emotional impact was obvious.

It's now common on many of these documentaries to hear at least one vet interviewed who you might include is "unreliable"  regarding their testimony in some areas.  They used the second person mostly, even when the topic appeared to be unique and personal to one man.  There are many reasons why the pronoun "you" can be used, especially when the topic explained is happening to others, or the event is something expected if "you" had been there.  We hear second person often in the language of athletes who fail as they distance themselves with, "you prepare yourself and do your best but..."


There was one, in particular, of whom I concluded:  Deception indicated.

This doesn't mean that everything he said was untruthful, but it is more than just distancing language in some of his descriptions:  there is no connection between him and reality.

Can you spot which of the vets interviewed I concluded was deceptive?

He uses "either or"language to allow himself room to change his story...

Listen to what he says in the negative, that is, what he does not know.  He expresses this in open sentences.

The documentary does not "beep" out curses, but apparently it beeps out slang for Chinese soldiers.  In this and in others, some of the elderly men clearly are pained in their memories, while others appear well pleased with the attention of the camera.  The temptation to embellish while being told you are "the greatest generation" must be strong.

I still enjoy the documentaries, but always listen with discernment.  It is something that I am not able to switch off.
Peter Hyatt as Statement Analysis Blog at 7:16 PM

My great uncle was a commando/sniper with the Devil's Brigade. He is still alive and living in Veteran's nursing home in Nova Scotia. I have never heard him speak about the war. In fact, no one in the family can recant any stories from him because he has never shared any.

It is surprising to learn "what he was". He's such a quiet and gentle soul. I guess what they say is true. (Still waters run deep.)

Back in the 80's, I worked for the Department of Veterans Affairs, preparing 'case precis' for adjudication of medical/non-medical benefits. I never saw my uncle's medical/enlistment/service files (I would have been severely reprimanded had I pulled his files "just" to read them.) But my job did require that I read veterans' files to "exhibit" information pertaining to their (medical) claim application for decisions regarding pensions for injury attributable to active force service.

Back in the 80's there were still quite a few WWI vets and I remember reading a lot about how, in addition to attending the wounded, the dr's also had to tend to the wounded soldiers' feet. Specifically, the trenches were wet and muddy and so their feet were soaking wet, too. They lived in the trenches/wet conditions for months at a time and as a result, the skin just absorbed the knit material.

I think every person needs to work for Veterans Affairs so that they have an appreciation for the sacrifice our men made for us.

Once learned , statement analysis can't be turned off.

It does however make for spoiling all novels, dramas and any movie, i find myself groaning when the number 3 pops up in a novel.(it being the lairs number) it is so predictable that i am suroprised when another number is used.

Watching documntaries about wars is fascinating, those who are truthful talk not only about what happened what they saw, they describe sounds and smells, even taste as they relive the moment. They take ownerships with i, me and mine, there is also the connection with our and us and we in the appropriate places.
those being not so honest about their involvement or role tend to use distancing language such as you, and we, us and our in unexpected places.
They were there but perhaps not frontline or in the role they are claiming or being asked about. ( cook for example)

I find now when i am on my pc doing whatever, i am half listening to the tv and when i hear certain words my focus is grabbed and i pay closer attention to what is said.

all movies are fiction. this includes documentaries. documentaries, that are watchable, are always edited in favor of dramatic momentum, even when made with best intentions/ integrity, etc, Editing IS deception. you can not escape it in film.

In regards to not being able to switch SA off. I sit and chuckle to myself when reading Fb status's, and thread entries.

I find myself reaching for my keyboard, but, for the majority of times i will refrain from what i call "SA'ing" (bad grammar i know, but hey, lol) people in social media.

I am an avid fan of Big Brother.I love human behaviour and watching the dynamics of power shifts and manipulation in the BB house.

BB UK started a week ago, and i published something similar, but, more in depth to my post above.

One of my friends, i won't name her, replied.

"Can't say i watch it! Drives me batty lol!"

Which i replied "Ooh, i noticed your dropped pronoun, and your embedded admission. Are you sure you don't dip in now and then Lol"

For which she then said "hahaha, MY daughter loves watching it and if I'M in her room then I have to watch it for a few minutes!"

I then said "gotcha".

This was all said in good humor.

A crew of more than 100 searched a rugged area and creek at Samuel P. Taylor Park on Friday for a 9-year-old girl who went missing from a campsite earlier in the day.

The girl, identified as Ida Rothschild from Santa Fe, New Mexico, camped at the park Thursday night with her parents and two brothers, ages 2 and 5. The parents last saw her playing with other children around noon. They searched a little more than an hour on their own before calling the Marin Sheriff's Office.

The sheriff's office responded to the scene immediately, and there are now up to 10 agencies involved in the hunt, including a prisoner firefighting crew from the state Department of Corrections.


The area is rugged, with dense growth and rolling open hills that go for miles, the sheriff's office said. Lagunitas Creek was receiving special attention because the waterway could be a lure to a child. Water rescue teams from the Marin County Fire Department were searching the creek area. California Highway Patrol aircraft were scanning the area, and thermal equipment was being brought in to assist as the search went into the evening.

The family had visited Muir Beach before coming to the park, and authorities speculated the girl could have been trying to find it because she enjoyed being there so much.

Ida was described as 4'2", weighing 50 pounds, with brown hair and hazel eyes. She was wearing a pink dress. The sheriff's office said the family was on vacation, and that the mother had either lived or spent time in Marin in the past. The parents were staying near the search area.

The search was to continue through the night and into the morning and beyond as needed, the sheriff's office said. More search crews were on the way.

Yes, once "you" learn Statement Analysis "you" can't turn it off.

I am sorely tempted every time an alleged hate-crime comes up in the news, to apply what I've learned here.

"You just feel so violated when a person does something like that to you, you know?" Indeed, say more.