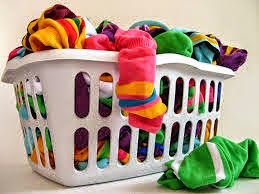 With some recent news stories, this is a good time to look at "laundry" in Statement Analysis.  It's also a place where critics often chuckle and dismiss a deeper understanding of not only analysis, but of the nature of sexual abuse itself.

On the list of critics it is interesting to note who is not likely found among them:  school teachers.

When "water", in any form, enters a statement, the analyst should be on alert for the possibility of sexual abuse.

Today, I did laundry, about an hour after showering.  This is true.

Glib anonymous comments often say "Hey, Peter, I washed behind my ears today.  Am I a victim of sexual abuse?" Comments like these came up in the analysis of Amanda Knox' statement, particularly about her detailed description of her shower with her boyfriend.

A little boy comes into class each day, full of energy and enthusiasm.  His teacher delights in him but she also must remind him to wash his hands, often, as he just loves to get himself dirty.  It's a bit of a challenge, but with her disarming smile, she has success more times than not.

One day, the little boy comes to class and washes his hands without being asked.

Then, an hour later, not dirty, he washes them again...

Teacher's protective instinct has alerted her to something that turns her stomach...

Sometimes victims of sexual abuse or sexual assault will find themselves involved with water.  Water being the key.

Some women of sexual assault suddenly stop showering altogether, as a way, perhaps, of making herself unappealing to the assailant, while others, in an attempt to "scrub off the filth" or "guilt" (artificial guilt).

Psychologists, nurses, therapists, care givers, and so on, have found a correlation between sexual abuse and water.

It is not proof of sexual abuse.

In Statement Analysis, it is similar.

When one introduces water into a statement, it does not prove sexual abuse or sexual assault, but it is something for the investigator/therapist/counselor/ etc, to explore.

This is particularly so given context of a police statement.

"I drove down 95, stopped at a restroom, washed my hands and proceeded to drive..."

This statement, in the investigation of a missing teenaged girl was flagged by an analyst suggesting that if he showed other signs of guilt, the time he stopped was probably shortly after the sexual attack of the teen.

When "water" enters a statement where it is of no particular point to the statement, it is especially alarming.

Let's say you asked me to tell you about my day.  I said:

"Today, I got up, had coffee, took a shower, got dressed, did the laundry..."

This is a truthful statement.

From the point of analytical interviewing, you would have certain questions for me.  You might explore sexual abuse, especially if that is what is being investigated.

"I got up, had coffee, got dressed, did the laundry..." while leaving out (editing out) the shower.

Those with experience would hear the word "coffee" and ask me,

"Were you alone when you had coffee?"

This is because "coffee" is often mentioned when someone else was present.  It may have no relevance to the investigation, but in this interview, it might.

"Heather brought me coffee this morning."

I was not alone, though I drank it alone because she was ironing.

Laundry is a pretty much mundane activity.  It did enter my language, and you would need to explore why, for me, there was a need to mention laundry.  I did some other chores, but I did not mention them.  The answer is because the laundry had piled up a bit, and I had more free time than Heather, today, and wanted to 'surprise' her with a bunch of chores done so that she could relax.

The context is casual.

Now, what about a missing child?

Misty Croslin's statement was made when Haleigh Cummings was "missing" and my analysis concluded that Haleigh was dead, and that she was a victim of sexual abuse.  (I had lots of sample to work from).

In a recent case, a father said he could not find his daughters as he had put them to sleep and did the laundry.

I find his statement concerning.

I find his inclusion of "laundry" of concern.

He placed his emotions in a "perfect" part of his story, which is often artificial.  At best, we are looking at a neglect case.  At worst?

For more information on "Water" in Statement Analysis, see:

Also see the statements of Misty Croslin and Amanda Knox.

00:0000:00
Gifford: “Again that’s some of the things that we’ve talked about I think every couple goes through, issues and arguments, I don’t even want to say arguments but disagreements, there was nothing that red flagged us as anything else going on but normal couple stuff, like I said, we don’t understand what happened or what could’ve.”

He said that the community has been outstanding in their outpouring of support and that their family is working to stay positive.

00:0000:00
Gifford: “There’s days where one of us will go dark and think the worst and the rest of us are there to cheer them up and cheer lead, get us back thinking positive and be hopeful, that’s where we’re staying, we’re staying hopeful that it’s going to be resolved and they’ll be home. We’re hoping they’ll roll in and they’ll go, what in the world is going on and we’re all going to be embarrassed that all this happened but that’s ok, we’ll hug them and then we’ll kick their butts, we’re hoping that that happens that’s our hope and we have to stay with that.”

Police Chief Gus Sandahl has said that this is their top priority.

there was nothing that red flagged us as anything else going on but normal couple stuff,

This is a great post, because it highlights the difference between a normal description of someone's day, and extraneous, totally unnecessary facts that guilty people often include to sound honest (at least, that's why I think people include unnecessary facts, but as you often mention, it's also subconscious spillover). I think a lot of commenters don't understand that, in the context of telling a general story to police when questioned, mentioning that he washed his hands is just weird. We all do that numerous times throughout the day, it's not something most people even remember. Why would someone need to say that, unless they are subconsciously adding facts? The only time it would make sense is if an interrogator says, "take me through each and every step of your day." Then, a person being questioned might start with, "I woke up, used the bathroom, brushed my teeth, took a shower, put on makeup, fixed my hair, put on work clothes, ate breakfast, drank coffee, drove to work, etc." But this isn't how people are interrogated. I think you're spot on and hopefully the naysayers will understand.

Peter, baby Lisa^s mom mentioned laundry in an interview as well, I thought it was odd.

*Deborah Bradley says she might be doing laundry or running an errand when the anxiety sets in.*

This guy was convicted of murdering his wife..48 hours just had it on tonight. There is a PDF of his statement to police linked to in the article, in case you're interested: http://www.komonews.com/news/local/Jurors-hear-David-Pietz-statement-to-police--224340541.html?mobile=y