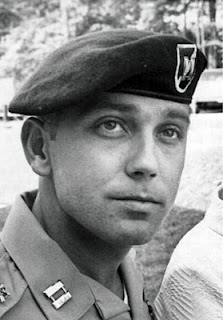 Jeffrey MacDonald, a Green Beret doctor convicted of the 1970 murders of his pregnant wife and two young daughters, was back in federal court Monday for a hearing on new evidence his lawyer says will prove that MacDonald is innocent.
MacDonald, now 68, was granted the hearing based on defense contentions that newly tested DNA points to other suspects and that sworn statements by a former federal marshal will show that prosecutors threatened a crucial witness whose testimony could have exonerated MacDonald. DNA from three hairs found inside the house does not match MacDonald, his wife or his children, the defense says.
Opening testimony focused on the marshal and a heroin addict, both now dead, as MacDonald's lawyers tried to persuade a federal judge that four intruders committed the murders, as MacDonald has contended for the past 42 years. MacDonald is serving three life terms for stabbing and bludgeoning to death his wife, Collette, and daughters, Kimberley, 5, and Kristen, 2.
The case was a national sensation in the turbulent 1970s, spawning a best-selling book, "Fatal Vision," a hit TV miniseries and decades of speculation and conspiracy theories. U.S. District Judge James Fox must now decide whether to grant MacDonald a new trial.
MacDonald's lead lawyer, Gordon Widenhouse, told the judge that "no reasonable juror" who heard the new evidence would find MacDonald guilty.
In opening statements, Widenhouse said Deputy U.S. Marshal Jimmy Britt heard the heroin addict, Helena Stoeckley, tell a federal prosecutor in 1979 that she and others were inside MacDonald's home at Fort Bragg, N.C., the night of the murders on Feb. 17, 1970. But Stoeckley did not repeat those statements during her testimony at MacDonald's 1979 federal trial because the prosecutor threatened to charge her with murder if she did so, Widenhouse said.
The defense says Stoeckley, who died in 1983, is the mysterious woman in a floppy hat MacDonald says was one of four intruders who burst into his house, stabbed and beat him unconscious, and killed his family. Stoeckley told reporters and others over the years that she was inside the house when her boyfriend and another man committed the murders.
MacDonald told investigators that one intruder chanted, "Acid is groovy, kill the pigs," inviting comparisons to the Charles Manson cult killings in California six months earlier. Police found the word "pig" scrawled in blood on a headboard in MacDonald's home, and the same word was written in blood at the murder site in the Manson case.
Prosecutors allege that MacDonald concocted the scenario after reading an Esquire Magazine account of the Manson murders.
MacDonald attended the proceeding, dressed in a baggy tan prison uniform with the words "Inmate New Hanover County" printed on the back. The hearing is expected to last up to two weeks.

Peter Hyatt as Statement Analysis Blog at 6:06 AM

Do you have statement analysis of him?

That's what happens when pscyobabble rules. It assumes whatever one reads, listens to, or sees on the TV or at the movies is the mindset to be used against the person of whom a crime has been committed.It fails to reconize that other people also have eyes, ears, and minds that aren't working properly.

He dun gone and dun it himself for attention. Pfft!

Larry king interview with Jeffrey MacDonald. This site has a ton of other news archives and documents pertaining to the case.

Affidavit from mother of the alleged female present at the murders.

I've been following this case since 1982. The blood patterns in the house and the debris from his torn pajama top tell the entire story; he is guilty. Now that I've discovered statement analysis, it will be interesting to go back and review what he said after the murders.

I also read Mark McClish's analysis of this case. MacDonald was deceptive about what happened the night his family was murdered. I believe he is the killer and is rightfully imprisoned.
-ShaynaCat

I saw a story about this when I was a kid, maybe on 20/20, and the images haunted me ever since, especially the one with the littlest one with her her bottle off to one side.

sigh... How did he ever think that would be believable?

I read the book about this long ago. Fatal Vision I think it was called. I know his statement is ALL over the place and thought it was hinky even before I knew anything about Statement Analysis. However what convinces me absolutely of his guilt is right there in the book for anybody to see. In the middle there are pictures of the crime scene, his wife and children's bodies are in white silhouette I think but the blood spatters are not doctored and are in plain view. In one of the pictures there is a suitcase which is devoid of blood despite the floor and wall all around it being spattered liberally with blood. I can't remember the picture exactly, whether the suitcase was on the bed or the floor, just that it was totally clean when it should have been covered in gore had it already been there when the murders went down. Your wife and children have been murdered, you'vejust been a victim of an attempted murder and a home invasion. One of the first things you do is get out your suitcase? Who would think of their suitcase after such an event? Someone who was guilty and had thoughts of going into hiding.

I read the Mark McClish article, thanks for posting it, Jazzie. MacDonald's statement shows guilt.

Another thing that surprised me about his statement is, I would expect a green beret to have responded to the supposed attack in a cool, clear, logical manner, and to have been able to describe what happened in a factual, sequential way, which he did not.

He expresses feelings about his own injuries and fears but nothing about the horrific injuries his family members received.

THIS (Lis' comment). Where was his concern for his wife and kids? I don't know anything about this case except for the Larry King interview linked above. He had an awful lot to say about his own injuries, but none about his wife and children. There were also distinctive things within some of his statements, but I'll have to go back and look again to remember whath they are. I wanted to believe he was innocent but cannot.

As much as he looked guilty with statement analysis, I still was torn by all the hidden/lost evidence and Helena stating she was there and men with her killed them.

However after reading everything I could find there was one thing that finally clicked that was so clear I'm surprised it was not addressed the most... It may have been mentioned some place I missed, but didn't seem to be the most critical point.

Um guy had a collapsed lung! Which we know is a fact...He would never have been able to do that.

Which now convinces me that he did kill them.


The other lil thing was pulling the knife out of her chest. I know just from watching tv shows that you never do that!

So I'm now convinced of his guilt.

I posted the comment about about giving CPR with his collasped lung.

I would also like to know if anyone has read anywhere if he had blood all over his face and arms when the MPS arrived?

I had another Thot related to my comments above about him giving CPR.


Now I would imagine, if they were on their sides and he rolled them over to their. Acks to do CPR, there would be 2 sets of blood stains on the beds. From photos there is clearly just one.