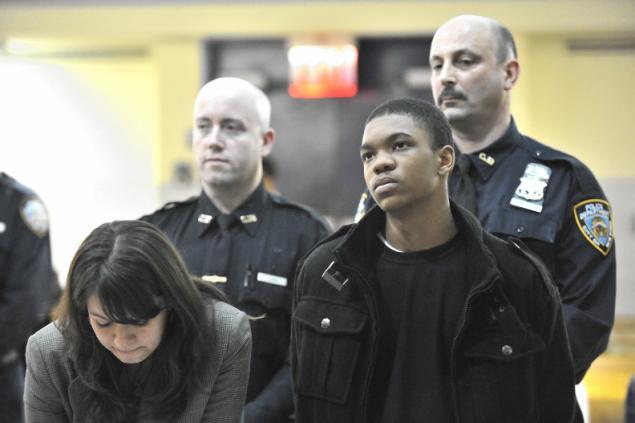 This is a horrific story in which a 17 year old is accused of throwing a 9 year old boy off the roof of a building.

From the NY Daily News:

been indicted for his attempted murder, prosecutors said.

Casmine Aska, 17, was also indicted on two counts of assault for the sickening Feb. 1 attack on Freddy

Freddy plunged five stories to the ground, and is in a medically induced coma on life support. He

identified Aska as his attacker to the paramedics who rushed him to the hospital.

“Cas dragged me to the roof and threw me off — I don’t know why,” he said, according to court

Note the direct language:  "Cas...threw me off"

Is it?  The words will guide us.

Her client’s been ordered held without bail pending his March 6 arraignment.


Here is the quote from the 17 year old for analysis.  The victim's statement is plain.

"On the roof I grabbed Freddy around the legs. His feet were off the ground. I turned around.

I slipped and Freddy fell.

I did not call 911. I did not tell my mother. I did not check to see if Freddy was ok. I did not hear the thud until I went into the apartment"

1.  "On the roof" is extra language which tells us that the subject may have grabbed the victim somewhere other than just the roof.
2.  "I grabbed Freddy around the legs" is very straight forward and likely reliable.
3.  "His feet were off the ground" is passive language.  His feet cannot go off the ground on its own.  The passivity shows attempt to conceal responsibility.
4.  "Freddy fell" is also passive language.  He does not tell us how Freddy fell.  This is another attempt to remove himself from the responsibility.
5.  Note all that he reports in the negative as very important:

d.  He did not "hear the thud" "until" he went into the apartment.  The deception here is obvious.

There is enough evidence in his statement to conclude that he deliberately threw the 9 year old off the roof in order to cause harm or death, and his report of what he did not do indicate not only that he wanted his victim to suffer/die (not receive help) but that he did not want his activities to be discovered.

Peter Hyatt as Statement Analysis Blog at 9:24 AM

This is horrible! No need to say racist comments though anonymous....there are plenty of horrible white people out there too as we well know!

What would possess this 17 yr old to throw the 9 year old off the roof? Drugs?

I hope this boy can recover. I hope this sick twisted individual who threw the boy off the roof is locked up for life. I'm sure this isn't his first time harming someone and it won't be his last.

He has a hardened look on his face for such a young man. His negative statements shows a lack of empathy or sympathy. If this was an accident he would have called for help. IMO the fact that he failed to help the younger boy will weigh heavily on a jury if this goes to trial.

The deception is so blatant here.

I wonder what the defence will use as an excuse?

Throwing someone off a 5 storey roof is meant to kill them, it cannot be passed off as "i didn't mean to hurt him when i threw him over"

He is bloody lucky he isn't facing capital murder charges.

In no way can it be described as accidental or not pre meditated. the moment he grabbed the boy and hauled him to the roof shows pre meditation, there were numerus times he could have stoped yet he didn't. This was attempted murder plain and simple.

Freddy says "to the roof" and Casmine says "on the roof". Interesting...

This 17 year-old is a cold-hearted killer.

Too horrific to image. Poor 7 year old. May the Angels watch over him. Prayers for him and his family.

Stone cold hearted murder. Deception is blatant. He heard the "thud" inside the apartment. Really law of physics work in his brain in such fashion? The 17 year old should never be allowed to walk freely again.

I can't stop looking at his face. So much attitude. This person is a lost cause. He needs to be in jail for the rest of his sorry life

You better believe the other occupants of his apartment/home can sleep better at night now....or maybe they are all peas in a pod....more trouble waiting for an opportunity.

The attitude on the face of the accused boy looks like many many of the rapper thugs who are in the news for ugly reasons from time to time.
Frightening.

I am interested in contacting you regarding your statement analysis of this case. would you please contact me: eleenorehide@gmail.com