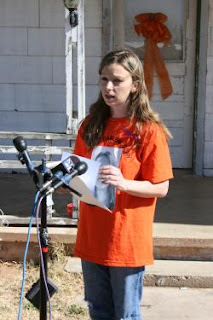 Statement Analysis has shown that Billie Jean Dunn, Person of Interest in her daughter, Hailey's murder, has been deceptive, from the very beginning, about what happened to Hailey, and was the author of the deceptive story of the kidnapping.  It was her language, not that of Shawn Adkins, that described the "3 o'clock" "sleepover" story.

When one enters the language of another, the subject repeats what has been told, but in this case, Dunn spoke for herself on The Nancy Grace Show.

She now speaks out, after the memorial, and continues to give insight into how Hailey suffered before her death, in a home that had sexual perversion (child pornography, bestiality, home-made pornography) drugs and violence (including serial killer literature, sexual homicide literature, and 'blood lust' videos).

When attempting to portray herself as the worried mother, she employs language that comes from her own experience.  This is called "leakage", as the brain, which knows what happened, signals the mouth to use wording, even while attempting to deceive.  In similar manner, Mark Redwine, in attempting to portray himself as a worried father, leaked out that he and his son, Dylan, were in an altercation.

The article mentioned being "chained" and "tortured" but did not include direct quotes, therefore, we cannot do analysis outside of noting that in her language is the wording that includes "torture" and "chains", and that she was there to note:

Statement Analysis is in bold type
.

This woman is still trying to peddle lies about her "non" involvement in Hailey's death.

I'm sick of waiting for justice. We all know she and SA killed Hailey, we all know all her lies so why no arrest? WHY has LE never called her a POI or Suspect?

Something is terribly wrong here.

http://www.oaoa.com/news/article_fd259cc0-c25b-11e2-a502-0019bb30f31a.html
Quote from BD on Odessa American newspaper
“I am hopeful from things I hear from the FBI that there is some evidence that points to a suspect or suspects,” Dunn said. “I hope it is a rapid arrest with severe and just punishment.”

Here she is quoted saying suspect or suspects? Which is it BD?

“I want to take other mothers under my wing and get their child’s face out in the media,” Dunn. “I want to make sure Hailey has a legacy and I will start doing some advocating.”

This piece of writing will assist the internet viewers for creating
new weblog or even a weblog from start to end.

So now, BD is implying that she is angelic and capable of "taking other mothers" for what? Fools?

She had her chance to protect Hailey but chose to protect Shawn, so she is going to make another attempt to redeem herself by exploiting innocent mothers?

What a crock of BS.

This woman is in need of mental health therapy.

“I still think it a possibility (Adkins was involved),” she said. “I know the generalized area where the remains were found and it would probably be someone from West Texas who knew all those roads.”

**She knows the generalized area where the remains were found. She would probably be someone from West Texas who knew all those roads. She doesn't say where Hailey was found, she calls her daughter "remains".

“I don’t believe there is any focus on Billie at this point,” Young said during an interview Tuesday. “We are making every effort to be cooperative with investigators.”

When and if an arrest is made, it remains to be seen where the case will be prosecuted — it could be either the county where the crime occurred or where the remains were found, Young said.

**I don't know why he would even make this statement. Why would he say "when and if an arrest is made"? For an innocent parent it would not be when and if - it would be WHEN the guilty party is arrested. They wouldn't stand for anything less than for justice to be brought down on their child's killer.

"it remains to be seen where the case will be prosecuted — it could be either the county where the crime occurred or where the remains were found", Young said.

DEE
"it remains to be seen where the case will be prosecuted — it could be either the county where the crime occurred or where the remains were found", Young said.

Very good catch there, I missed that until you pointed it out.

I think LE needs to focus completely on Shawn, and not billie.
Not because I think she is innocent, but if they can indict Shawn, he will spill his gutts about Billie.
The GJ has to have enough to implicate SA alone, even without going for Billie at the same time.

“We are making every effort to be cooperative with investigators.”

It sounds like he is saying they are making an effort to be a part of the investigation, but LE and the DA will not accept the cooperation.

Anonymous said...
I think LE needs to focus completely on Shawn, and not billie.
Not because I think she is innocent, but if they can indict Shawn, he will spill his gutts about Billie.
The GJ has to have enough to implicate SA alone, even without going for Billie at the same time.


***************
I agree. Although I want them both ultimately charged, I think concentrating on Shawn first is best. He's the weakest link. Among the deception, he's told some truths - Look in Scurry County, Look at both of us. I think if he got pressured, he might crack and spill all. I think that's why BJD was telling him to kill himself, she doesn't trust him not to crack under pressure.

"it remains to be seen where the case will be prosecuted — it could be either the county where the crime occurred or where the remains were found", Young said.

This woman and her lawyer are a joke. I am shocked this murderous wench thinks she can advocate for parents...mark klass has some competition??? Lmao

Thanks anon, Lis and veruca. That jumped out at me on my second read through.

“We are making every effort to be cooperative with investigators.”

He doesn't tell us they are in fact co-operating with investigators.

Anonymous said...
“We are making every effort to be cooperative with investigators.”

It sounds like he is saying they are making an effort to be a part of the investigation, but LE and the DA will not accept the cooperation.

I cannot find the link now but wasnt Shawn's testimony about the remains being in Scury County given in the negative and/or reflected back as a "yes"/"no" answer? I had a link covering this and I've been unsuccessfully trying to relocate it. This is of huge significance, if my memory serves me correctly as to what he actually said during the questioning where this came up. I am almost certain it was no where near what SA calls a reliable statement/claim and proof after the fact doesnt make it so.

I believe Shawn and Billie are past neck deep but I do not believe he gave a reliable indication that Hailey's remains were in Scurry County. I am continuing to look for hard proof of what he said and its exact context, if anyone can help, I'd greatly appreciate it. :-)

What kind of mother wants her daughter's murderer to kill himself? Most mothers want his sorry butt in court, then on to trial, sitting in jail getting his ass beat, then on to prison to get his ass beat some more, and then on to death row. And Some mothers might want to take care of the death row part themselves. But not Billy, oh no, she wants Shawn to kill himself please...Right, I bet she does. Then all her problems would be solved. Just blame him for everything and he wouldn't be here to turn on her. I bet she's spitting mad that he hasn't granted her wish. Yeah, BJ wants Shawn dead, but for all the wrong reasons. After making this statement, Shawn had better watch his back and sleep with 1 eye open. If LE is smart, they'll keep an eye on him, and make sure he doesn't turn up dead, either from granting Billy her wish, or from some 'random' break-in. Oh, if I was in his shoes, I'd be shaking.

which has me thinking...those 2 are probably back together so they can keep tabs on what the other one says. It looks like they are both in deep, with Billy being in too deep to wriggle out of trouble if Shawn spills the beans. I wonder what that hag did? She didn't just lie for him, or she would have already admitted to that...if for no other reason, than to get LE off her back. She could have admitted it, said she was in love and scared, and then gone about with her stripping and pills. And speaking of the stripping, what kind of hard-up, desperate man would pay to look at that old skank? And eeew, I bet she takes those dummies for every penny she can con out of them. She works hard for the money, yeah.