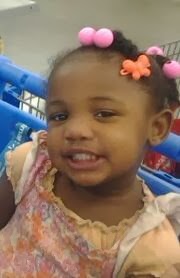 We did not put up the article about the "Myra spotted" report, as it wasn't solid reporting.  The use of dive teams tells you what officials actually think, more than the local media reporting the "sighting" as they did.  Expect the searching to continue in the driving distance (back and forth) of approximately 2 hours (or less) from Myra's home.
If officials believe she was sold, no such boundary exists.

Myra was reportedly last seen about 11:30AM ,but not reported missing until about 4PM.

On Thursday, dive teams from Madison and Ridgeland wrapped up their 2nd day of searching the pond across from Myra Lewis' home in Camden. The dive team tells us that the pond is clear as it relates to the search.
"We've overlapped the patterns," said Madison Fire Department shift commander Dwayne Meeks. "Did grid searches in the pond. We've overlapped the grid searches. So we have put our hands on the bottom of this pond."
Crews used sonar in the pond twice before sending in divers. The first time was the first day Myra went missing. They repeated the process on Tuesday. Meeks said the divers serve as a double check.
"It's stumps and logs and the divers can actually get up under those stumps and logs and check to make sure there's nothing in this pond," described Meeks.
Meeks said anytime you put a diver in the water, it's dangerous. The depth of the pond on Mt. Pilgrim Road can go from 2 to 14 feet quickly when divers are searching. They have to keep safety a priority.
The crews also used the search as a training opportunity for the two agencies.
"Clear this pond," explained Meeks. "That way there's no question of anything that could be in it."
The Madison County Sheriff's Department says the divers are part of the investigative process and not the result of a new lead.
Peter Hyatt as Statement Analysis Blog at 9:54 AM

As more and more time passes, it's looking so bleak. There was so much excitement when someone reported seeing Myra in Memphis, and I was hopeful & optimistic that she was going to be found and returned home. This, in spite of concerns based on the few statements from family, but mostly based on demeanor & behavior of the family, in particular the delay in reporting to police. The sheriff even stated that he felt Myra was "still in the area." My hope for Myra is that she doesn't become another child who is simply gone & disappeared, like Kyron, Lisa, Ayla, Hayley, Aliyah & so many more.

Snipped:
Meantime, officials are holding the toddler's mother in jail on unrelated charges. And her family believes the sheriff’s department is trying to pressure her to reveal what she knows about Myra’s disappearance.

"Yesterday they held her in interrogation for 8 hours," said Martha Sanders, Lewis’s mother.

Sanders read from a prepared statement accusing the sheriff’s department of violating her daughter's constitutional rights.

"She has a right to plead the 5th. Her rights are not being read to her she is being held for anything to do with her baby."

Sanders says she doesn't understand why Lewis is still in jail after her family paid $500 to bail her out on the probation violation charge.

"Now we can't get our money back and then they put a hold on her."

Authorities tell us the hold was placed on Lewis by the Mississippi department of corrections, because of the original welfare fraud charge that lead to Lewis' probation.

She just did a food stamp fraud. It’s not like she's a criminal,” Sanders said. “She’s no threat to society."

"She has a right to plead the fifth." Why would she need to do that, unless there is guilty knowledge?

"Now we can't get our money back AND they put a hold on her." Order of importance. Money is more important than her daughter. We learn from our parents & this is Myra's grandmother speaking about Myra's mother.

"She just did a food stamp fraud. It's not like she's a criminal." Except welfare fraud is illegal, which makes her a criminal.

"It's not like she's a threat to SOCIETY." What about to her children?

Thanks for posting the article, ima.grandma. 1. Obviously the police think Ericka Lewis is involved or knows who is. 2. Why would a mother of a missing child plead the fifth? 3. The family is concerned about their $500...the FBI knew for $20,000 they could get someone to talk...if they knew.

Great points, Sus and Joann..and thanks for posting the update ima!

Interesting that Myra's grandmother brings up the idea that Myra's mom has not been read her Miranda rights, (which only happens when the person is arrested and charged with the crime). Also, grandma would have no way of knowing for sure what was said to her daughter in police custody. It seems like grandma may be trying to preemptively discredit any incriminating statements made by her daughter, by saying she was interviewed for 8 hours and wasn't read her Miranda rights.

Even more revealing is the Grandmother stating that she has the right to plead the fifth, (avoid self incrimination). Currently, Myra's mother is not charged with anything in regards to Myra's disappearance, so she would only need to request an attorney and refuse any further interveiws to avoid giving incriminating information. For some reason she hasn't done that, and it is obviously NOT due to lack of experience with the law, as she is already a convicted felon, in police custody on a probation violation.

I hope this is a sign that she is giving some sort of information about what happened to Myra. This is apparently a sensitive topic for the grandmother, who has twice brought up the idea that her daughter won't give incriminating evidence...first saying, 'they can pressure her, but she won't give in' (paraphrased), and now..'she has a right to plead the 5th'.

Grandma is STILL not focused on 2yo Myra's plight, but rather on the money the family put up for bail and can't get back, that her daughter is being questioned, and that her daughter has a right to avoid incriminating herself.

The grandmother is a piece of work also. Another grandmother with no feelings of concern for her missing granddaughter. It's sad how many of these types of grandmothers are popping up with the missing children cases.

I understand a mothers love to their child, grown or not. I always thought a grandmothers love was equal if not stronger to her grandchildren. :/

I understand a mothers love to their child, grown or not. I always thought a grandmothers love was equal if not stronger to her grandchildren

Please don't give up this feeling. You are right! It is true more often than not. Myra's grandmother's actions and words go against nature. Grandchildren are God's greatest gifts and we should treasure every moment we have with them. I burst with pride and sometimes can hardly hold in tears of happiness just holding or hugging them.