Muslim Bomber's Wife: Did She Know? 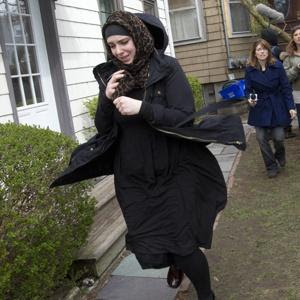 The FBI is probing whether suspected Boston bomber Tamerlan Tsarnaev’s widow knew about his deadly marathon plot, a law-enforcement source told The Post yesterday.
Federal agents yesterday made three visits to the Rhode Island home of the parents of Katherine Russell, 24, an all-American-girl-turned-terrorist’s-bride.
During the first encounter, the agents were in the home for about 10 minutes.
A couple of hours later, The Post observed the same agents — two men and a woman — briefly speaking with Russell’s mom, Judith, through the door. Russell, who has a 3-year-old daughter, Zahara, with Tsarnaev, 26, is believed to have been inside.

Tamerlan Tsarnaev
One of the male agents was carrying a manila envelope, books and papers and walked away again with them after the brief chat with the mom.
In their final visit last night, the agents spent two hours in the house before leaving, followed by the family’s lawyer, Amato DeLuca.
“We just did some talking. We’re doing our best to try to deal with a very difficult situation. The family is going through a lot,” DeLuca said.
He refused to say whether the agents were with the FBI, ATF or ICE, confirming only that they were with the feds.
“Other than a brief interview with the FBI, there has been nothing more than that,” DeLuca told The Post. “Quite frankly, she was married to that man, so it doesn’t surprise me that they would do something of an investigation.’’
DeLuca later told The Post, “Katherine is innocent, and she has no knowledge of any of this.”
Federal agents had been by the parents’ house on Friday, as well, according to the Daily Mail.
Russell learned her husband was implicated in the terror attack by watching TV, DeLuca said. He did not say whether she identified him for authorities after they posted his image.
Meanwhile, a law-enforcement source told The Post the FBI is scouring video of the marathon and showing Russell’s picture to witnesses to see if she was at or near the finish line when two bombs ripped through the crowd last Monday, killing three people and injuring nearly 200 others.
“We’re looking at [footage] and showing the photo,’’ the source said.

Peter Hyatt as Statement Analysis Blog at 4:24 AM

Peter,sorry about the double post,i thought i would put this link up here aswel.

THE BADLY INJURED BOSTON BOMBING SUSPECT STILL CANNOT SPEAK, BUT IS ANSWERING QUESTIONS IN WRITING, ACCORDING TO REPORTS.

Lets hope these Q+As are released and we may get a better insight into what actually happened using S/A,instead of the press and the media jumping to conclusions.

DeLuca later told The Post, “Katherine is innocent, and she has no knowledge of any of this.”

let's hope there is a release of transcripts, but with the FBI and the political sensitivity, I won't hold my breath.

The rush to downplay Islam is disturbing.

Apple, also notice that he separated the two thoughts with the word "and"

If anyone has had the opportunity to watch the videos at the link I left yesterday on the Importance of Reliable Denial thread, the aunt refers to watching video (YouTube?) and uses the word "secret". It was hard to understand her because she was jumping all over the place. But the words video and "secret" made an impression on me. BigRussian referred to the wife's husband being interviewed in 2011 by the Feds. No doubt they continued to monitor him. Many, here in Canada, wonder how these young men become indoctrined. Aside from the "news" being beamed into countries via satellite, (thereby making it unnecessary to assimilate,) YouTube may be the "real" venue for messaging.

One last thought, why is the Bomber's wife being described as "all American" when she is wearing a Hijab?

If anyone has had the opportunity to witness North American girls (yes girls, women are too evolved and less impressionable) "convert" as they move into the Muslim fold/marry, you can't help but think "cult". At least that's my impression. I've watched a friend lose her daughter this way. In short she and the rest of the family are "infidels". It's very sad.

I hope for her sake and her daughter's that she didn't know anything.

Maybe they are downplaying the Muslim angle to prevent more panic or to prevent innocent Muslims from becoming targets.

Then again, it could be plain ole political correctness.

“We just did some talking. We’re doing our best to try to deal with a very difficult situation. The family is going through a lot,” DeLuca said.

This quote sounds like the family wants to limit the flow of information.

"We just did some talking" sounds like there is more talking that needs to be done.

"We're doing out best" sounds like they want to limit what is said to the investigators.

They were uncaring about all their victims, including their own families and friends.

This is typical of killers.

“We just did some talking. We’re doing our best to try to deal with a very difficult situation. ..."

He is trying to minimize "talking" with the words "just" and "some".

"to try" is extra wording.

IMO, the spent some time strategizing what to do/not do with a "very difficult situation".

"Their daughter lived with her husband because she worked seven days a week, he said.

"She would go off in the morning, she would work till late at night," he said. "She called to see how her daughter was and that kind of stuff, like any person would."

That's very odd.
A "devout muslim" woman living apart from her husband and child??
And, a devout muslim man taking on primary childcare duties of his 3 year old daughter???
:/

More going on here than meets the eye with their marital situation, I'm guessing.

When asked whether anything seemed amiss to his wife following the bombings, DeLuca replied: "NOT AS FAR AS I KNOW."

Who ELSE "would know" whether or not something seemed amiss to HER, other than herself???

I think she knew exactly what her husband and his brother were planning.

I don't know for sure if the wife knew, but my guess is that she did. She had to see the change in her husband and his devotion to Islam.

No matter, this will be downplayed to be just a domestic attack. Even though there was just a big bust in Canada that broke up an Al Qaeda like attack planned on a train in the USA.

do you think that bust was related to the info that the bomber is sharing??

Police are investigating whether
her (bomber) husband, Tamerlan, murdered three 'friends' a few years ago. Unsolved murder, slashed throats.
Plus he beat her up before they married. Nice guy. So she LEFT her small daughter with him... Katherine needs to get some help herself- at very least, she is making terrible choices.

seems quite plausable that she didn't know his murderous side, as we all know many men like to keep themselves pure in the eyes of their wives -- then go live another life behind their backs.

on the other hand -- it's very compelling to wonder if she sensed anything -- and what she didn't let herself know -- if it is the case that she didn't know.

I suppose this is extraneous -- but the two brothers and especialy the wife -- are all very striking, attractive people. my gut is that physical prowess and ego played a lot into the older brother's personality. envision that he was both charasmatic and controlling in his close relationships -- and that he could be. kinda a young (extremist) raging bull -- is what i imagine.

Judith and Warren issued a joint statement saying: “Our daughter has lost her husband today, the father of her child. In the aftermath of the Patriot’s Day horror, we know we never really knew Tamerlan Tsarnaev. Our hearts are sickened by the horror he has inflicted.”

-"the Patriot’s Day horror" is passive, not naming what actually happened or who was responsible.

-"we" know "we" never really knew Tamerlan Tsarnaev. I wonder if 'we' speaks of the parents only or does this include their daughter? The use of his full name is distancing, and without any personal ownership ("our son-in-law").

No doubt they wish they had never heard the name Tamerlan Tsarnaev.

SOUNDS LIKE MAYBE THE BROTHERS' MOTHER WAS THE MASTERMIND.

from a yahoo article...Tsarnaeva said she urged Tamerlan to embrace Islam in 2008, concerned about his drinking, smoking, and pursuit of girls. She said he began to read more about it on the internet. The mother said she also urged him to quit boxing because she told him Islam prohibits hitting someone in the face.
Tsarnaeva praised Tamerlan's wife, an American-born woman named Katherine Russell who converted to Islam and began to wear a headscarf.
"She is a serious, good, American girl who converted to Islam as if she had always been a Muslim. We all love her a lot," she said. The two had a daughter who is now a toddler.
Russell chose the name Karima after converting to Islam, the mother said. She said her son approved, telling his wife, "If you like it, it's a good name."

I had the same thought- the mother is responsible for her son's attitude...

I wouldn't make too much of the joint statement. It reads like it was written by an attorney. Perhaps that explains any distancing language.

The bomber's wife may have been in denial. I'll be really surprised if she is found to have been complicit in the crime. Maybe she noticed that he was becoming more religious and was afraid he would kidnap their daughter.

Please do not forget:

"The subject is dead; the statement is alive."

You are not analyzing a person, but a statement.

If you analyze the statement it does not matter if it was written by an attorney or by another. The analysis will reveal what the statement contains.

Also remember: We are not dealing with reality, but verbalized reality.